In my first couple of weeks [at Baylor University], I met a kid I’ll call Peter. I can’t remember what his parents did for work, but whatever it was, it allowed him to have $5,000 a month to spend on whatever he wanted. Not the necessities like books or courses or even the meal plan. I’m talking five thousand extra dollars.

I didn’t want to run with Peter because of what he could do for me. I wanted to run with him so people would think that I was a high roller like he was. We went into this tit-for-tat thing, where I’d say, “Oh no, this round’s on me” or “Hey, I’ve got this one.” You don’t have to be a mathematician to figure out that a couple hundred dollars in savings doesn’t go far against $5,000 a month. One day I went to buy gas and my credit card was declined, and I realized I couldn’t fake it to keep up with this kid. At least not for long. When I ran out of cash, I’d hide out for a few weeks until I could afford to go about with Peter again. It was a real shameful cycle.

You’d think that would have sent me a message, but my personality muscle had become so conditioned to create new identities that I continued to generate new versions of myself throughout college. I was still being the guy everybody liked because they’d think to themselves, Hey, this guy is a lot like me!

Fortunately, my imitation act took its final bow soon after I met Joanna Stevens. She didn’t seem to want a made-to-order version of me. She saw through all that nonsense. After we’d been dating a while, Jo sat me down and told me she needed to know who it was she’d be marrying. It became clear how easily this charade could destroy my chance of a life with this woman. You can’t sub in something artificial without compromising the integrity of the whole deal.

It was time to lock down a version of myself. It was not going to be Chip Gaines, High Roller, or Chip Gaines, Chameleon, or even Chip Gaines, All-American, but Chip Gaines, the Original. I might not have been buffed or polished, and I was really far from perfect, but I resolved to be perfectly real from then on.

Jo’s question forced me to drop the act and take up the task of dis- covering who I really was. I had to peel back all those crappy layers I’d accumulated and carried around with me since childhood so I could see what was really there from the beginning. Once I could clearly see the difference between what was fake and what was real, these qualities became my nonnegotiables: the strength of my faith, my dedication to my purpose, my love for my family, and my commitment to who I am. These were the watermarks that certified Chip Gaines, the Original. One of a kind, 100 percent unique. Every good thing in my life has come directly from my resolution to make these things nonnegotiable.

Identify your nonnegotiables, and all those made-up layers fall away. Then you start building from there. But peeling off layers you’ve worn for a long time is not easy. What you find underneath might be pretty unappealing at first — pale from the lack of exposure to sunlight, weak from lack of use. But ultimately you were given the stuff under there to hold you up and to help you move through the world. Once that outer protective layer is gone, and you get used to moving around without it, there’s no feeling as beautiful and free.

Make a list of qualities that are an unwavering part of who you are. Next time you find yourself f lopping around like a fish out of water, check that list. Are your actions in line with your nonnegotiables? Or, when you felt like you weren’t acting like yourself, was it because you had compromised your nonnegotiables? What could you have done to change that?

A couple of years [ago]… we’d been filming an ad for one of our partnerships. Normally, no matter what the occasion, you’ll find me in the same outfit: jeans, T-shirt, and boots. I’ve worn suits for weddings and things… where it would have been disrespectful not to, but nearly every other day of my adult life you will find me in jeans and a T-shirt. It’s like my second skin. But for this shoot, the directors had me trussed up like a Christmas goose. I was wearing a black tux and sitting in a velvet chair by a fireplace with a shih tzu on my lap. There may have been a pipe involved. Or at least that’s how I remember it. I felt ridiculous. It was Chip Gaines III, Esq.

I looked down at my lap and asked, “Whose dog is this?”

The directors told me, “That’s your dog!”

Then I asked, “Whose fireplace is this?” 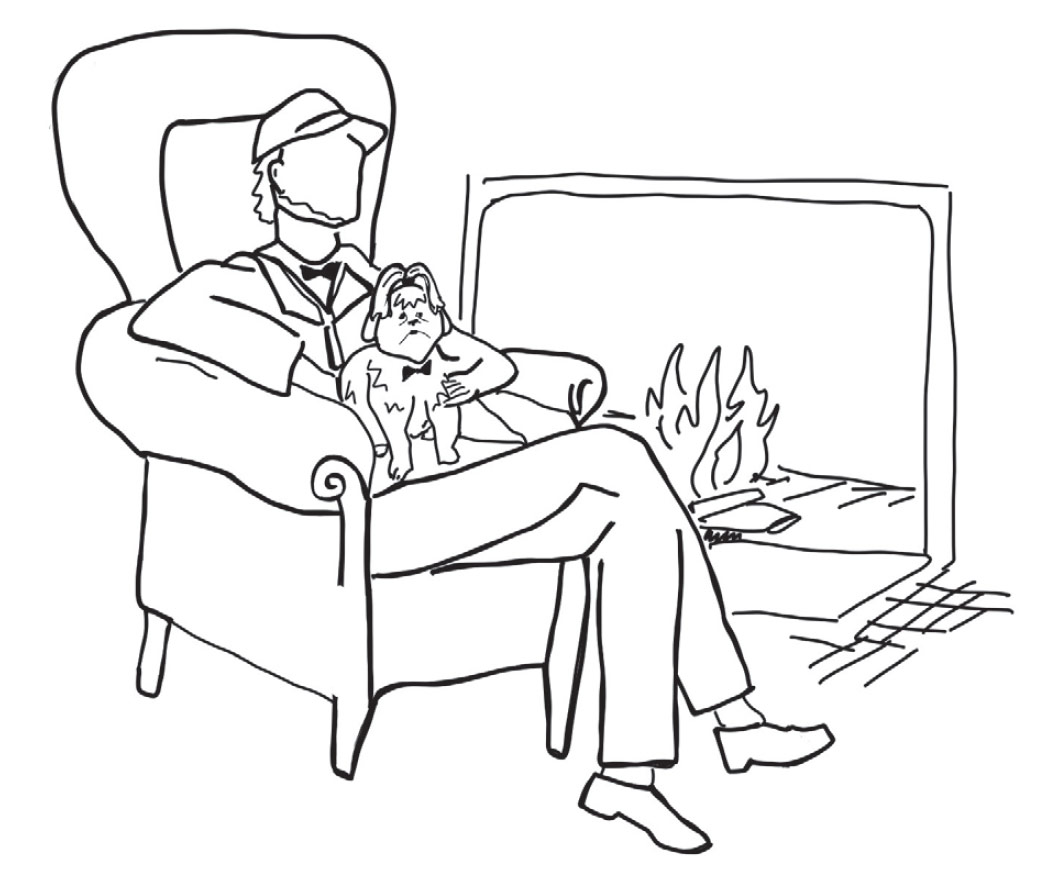 They must have thought I was joking around, ’cause no one answered. But this was no joke to me. People know us. They know we live on a farm. If they saw this ad and thought, Wait a minute, that’s not his house — or his dog, how long before they started wondering what else wasn’t real? Like, were those really my kids? Were Jo and I actually who we seemed? That shapeshifting feeling came back, and it felt like some serious black magic.

Assistants were buzzing around, getting light readings and checking sound, when all of a sudden, my heart started beating fast. I could hear the blood rushing in my ears. My skin felt itchy, my throat closed up, it got hard to breathe. It was like I was having an allergic reaction. What the heck? I excused myself to go to the restroom to pull myself together. That is literally what it felt like. I had to pull my self back into my own body.

After a few minutes, I got control and finished the promo, but I have to tell you, I was rattled.

Probably a dozen times since that moment I’ve had that same thing happen. The world kind of zooms in and out around me and I get dizzy. A bubble swells up in my chest, and something pushes down on it, making me feel like it could pop at any second. I have to take deep, gasping breaths, close my eyes, and say to the people around me, “Hold on one second. Sorry. Holy smokes. I kind of lost my breath there.” I come up with some cute little comment like, “Boy, I’m half the man I used to be.” Or I’ll imply I did some physical activity that took it out of me, ’cause that’s sure how it feels. But the fact is, the source isn’t physical or mental; it’s emotional.

I realized in that hotel room that every time my world takes a nosedive, I can trace it back to a single source: a dizzying gap between how I see myself and how the world is treating me. When I feel the pressure of a world that is trying to sway or dictate my behavior to make one of my nonnegotiables negotiable, it sends me for a tailspin.

What leads us to believe that the original version of who we are isn’t enough? Who was it in your life who convinced you that you needed lay- ers of camouflage to be worthy of acceptance? What passing comment started out as a “note to self ” but turned into a false identity?

Now consider the source of that comment. Was that person credible? Were they qualified to speak on behalf of your purpose? I doubt it. Yet here so many of us are, wrestling off those “fleeting” comments, wearing each one like a layer of armor. Ready for battle.

Each time we concede to someone else’s opinion of us, or we willingly buy into some lesser truth or inaccurate picture of who we are, what we’re really doing is surrendering our purpose. I believe with all my heart that when we abandon our true purpose, the thing God made us to do, we’re not the only ones who suffer. There’s a ripple effect. It really does change everything for everyone.

As much in business as in life, authenticity often means sticking with your gut in the midst of difference or even indifference. It goes hand in hand with discernment, an ability to “test the spirits” and see what is false. If you throw your thought or opinion out into the world and it comes back confirming your gut instinct, then you’ve got even more confidence to go and do that thing. But if the opposite happens, and it comes  back  smelling  of  uncertainty,  then  maybe  it’s  time  to  heed  the advice of those whose insight you trust.

Other times, being authentic is as simple as telling the truth: I didn’t make the deadline. I ordered the wrong product. I double-booked, so I missed the meeting. I screwed up.

In that moment, you’ll have to deal with the temporary negative ramifications, but what you’ve ultimately gained — even if it’s down the road — is integrity and respect. The distinction of being truthful.

That may not make you popular, but it does make you interesting.

Authenticity is much the same. You will find people will start looking at you like a beacon to guide them. Because everyone is walking around with their own layers, wearing them like armor, your very presence will be an inspiration. There’s a simple peace that comes with knowing yourself, and I believe people are drawn to that.

Excerpted with permission from No Pain, No Gaines: The Good Stuff Doesn’t Come Easy by Chip Gaines, copyright Chip Gaines.

So what are your nonnegotiables? And what might you do today to become more authentic… to be “real real”? We’d love to hear your thoughts in the comments!

Waiting for a Shooting Star

If You’re Happy and You Know It

Telling The Story of Epiphany with Puppets