For to us a Child is born, to us a son is given… And He will be called… Everlasting Father.
— Isaiah 9:6, emphasis added.

No one really knows what happened to Jesus’ dad Joseph. He’s around at the beginning when Jesus is a kid, but then he’s absent from the story during Jesus’ ministry years. He most likely died. There are legends and rumors and such… but no one really knows.

It seems like it’s only in the telling of the story of Jesus’ birth that we get any real picture of Joseph.  He cares for Mary, and his plan to separate from her secretly was so he wouldn’t disgrace her name. We know he’s got some royal blood, being in the Davidic line, and that’s what brings them to Jerusalem during the census. He listens to the voice of God and makes life-altering decisions because of this. He’s a carpenter, an artisan, and a provider to a family of many kids. He seems like a great guy. I wonder what Jesus thinks of him…

It’s a simple fact that everyone has parents. I know not everyone has two parents around, but we are all the by-product of two people — and that comes with a lot of wonder, weirdness, and weight.

It’s a wonder that we are our own person, but we can see so much of our parents in ourselves in the way we act and look. Their imprint is unquestionable, whether we like it or not.

It’s weird because family is something you don’t get any choice in. You just appear in an inherent connection with these other people for the rest of your life. You can have closer relationships with other individuals, but it’s only a very small group of people in all the world who will be your family, and an even smaller group you will call your parents. They will eventually die (like everything), but they’re always your parents.

Also, if you partake in naked midnight wrestling, you may become a parent yourself, and you’ll feel the immense weight of that responsibility. It’s scary, wonderful, risky, completely humbling and decentering, and at times entirely engrossing. I’ve already been interrupted seven times just writing this so far.

But one thing never changes — you have parents forever and may be a parent forever. You are connected to the two people you are a genetic combination of until the end of time, and if you produce life and become a parent, you will forever be relationally connected to that life you made. You can never stop having parents. And if you have children, you will never stop being a parent.

Jesus Christ died as a single man with no kids. And yet this prophetic word calls Him “Everlasting Father.” I don’t know if the mystery of this title will come to any full understanding anytime soon, but let us sit with the wonder of His name.

Am I an orphan to this existence?

His twofold answer comes in the record of His life lived out in ancient Palestine and in His very cosmic presence now through which all things were made. He can never stop having a father, and He can never stop being a Father. And out of all the titles we could have given Him, apparently “Father” was one of the ones we needed the most.

May you live into your true inheritance as the beloved offspring of the Maker of all things. 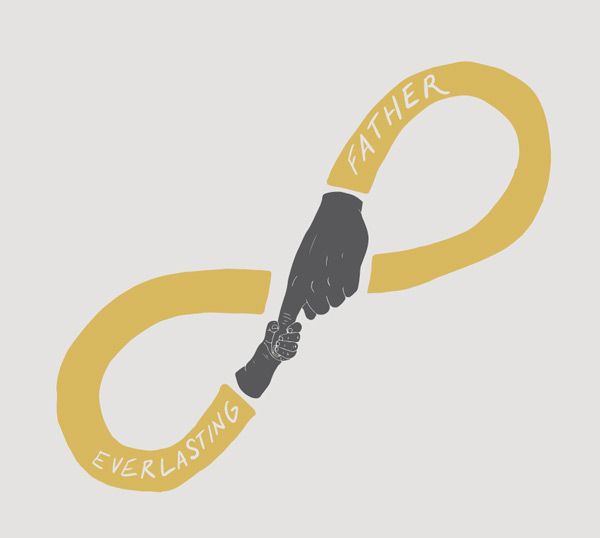 Art from the book Honest Advent by Scott Erickson

Excerpted with permission from Honest Advent: Awakening to the Wonder of God-with-Us Then, Here, and Now by Scott Erickson, copyright Scott Erickson.

What stands out to you when you reflect on Jesus as your Everlasting Father? How does it inspire or comfort you? How does it change your perspective on the birth of Christ? We’d love to hear your thoughts in the comments!

By admin
8 mins ago