Editor’s note: Two-time GRAMMY winning hip-hop artist and bestselling author Lecrae had inspired millions with his redemptive and gut-honest art. But when his personal life spun into chaos, he was forced to face the buried impact of the unhealed wounds — sexual abuse, physical trauma, addiction, and depression — that threatened to tear it all apart. Along the way, he realized the wounds we all carry have the potential to be unlikely guides to healing and freedom for ourselves, and others. In today’s excerpt from his brand new book I Am Restored: How I Lost My Religion but Found My Faith, Lecrae discusses some of the important shifts that took place in his thinking about God and his relationship with Him.

The biggest shift in my spiritual perspective involved coming face-to-face with how I viewed the Bible. In this season of life, I read the Bible from a completely different perspective than I had before. In times past I approached the Bible with a transactional mentality. I went to God’s Word for what I could gain from it. I would read the Scriptures with the goal of trying to make myself better. As much as I talked about the grace and mercy of God, I wanted to please God by proving my devotion.

In fact, that was the root of my problems. I didn’t truly believe in the possibility of God’s redemptive story. I only believed that God could redeem me in “salvation,” or in the moment when I made the decision to follow Jesus. I thought that He was redemptive only in that moment, not that He could take me from the lowest of low places and build me back up. When you read the Scriptures with this lens, it’s hard to believe that some of the stories are even real. They are far away from our context. But put yourself in their reality and you’ll find that the biblical accounts are not faraway pictures of a mythical spirituality. They show us just how powerful God’s redemption can be for us. Consider these examples:

When you take note of these examples, you start to realize that we don’t believe in a God who discards people and throws them in the gutter when they make mistakes. We also don’t have a faith that gives us the power to put others away for mistakes. Even the worst of people can be redeemed from their past. While it is inspirational to say that in theory, how far do we believe that God’s redemption can reach? Seeing my own mistakes has forced me to answer that question.

I believe that God can redeem even those who are abusive and predatory if they turn from their ways and receive the help they need. That’s why I refuse to hold on to hatred of and bitterness toward my abusers. Clinging to that pain and letting it cloud my vision would be easy, but I believe even my abusers can be redeemed.

I believe God can redeem absentee parents, including my biological father, even as I deal with the pain of his absence. I spent so much time running from being like him and being bitter because he ran from me that I didn’t realize he had a past just like me. Maybe he needed something that he never received in his own upbringing. Maybe he struggled with trauma and never had the privilege of going to therapy to work through his pain. He made poor choices that affected our family and my future, but even with all that baggage, he can be redeemed.

I have been wounded by fellow Christians who impugn my motives and make uncharitable statements about my positions. Their vitriol has hurt me and still continues to leave wounds that I’m working through. But as much as I wanted to leave the faith altogether, I came to the conclusion that we’re all learning and growing. A few years ago, I was just like them with that same attitude toward others. If I can be redeemed, then so can they.

Hashtags and protests reveal countless instances of white supremacy and bigotry from racists who feel empowered by the climate of our culture. Their actions and words are vile, revealing the darkest parts of the human heart. But I pray that they leave their evil patterns of behavior. Even racists can be redeemed by God.

I was addicted to self-destructive patterns of behavior that almost destroyed my life and everything I worked for, but God didn’t give up on me. He came after me and picked me up, even after my most embarrassing moments. God brought me out of my pit. Because He redeemed me, I’m convinced that everyone who has fallen short can find redemption.

For years I’ve heard that “the ground is level at the foot of the cross,” but now I actually believe it for myself.

The Consistency of God’s Character

In my darkest moments, I questioned God. I didn’t just doubt my relationship with Him on a personal level, but I extended that doubt to His existence. I don’t know of many people who never go through seasons or moments of doubt. Many people have trouble reconciling what they believe about God with their circumstances, causing them to abandon the faith entirely. After enduring the consequences of decades of trauma and years of self-destructive behavior, I have never been more confident in the consistency of God’s character.

I don’t say this to shame anyone else’s doubts or cause people to feel as though I am a superior follower of Jesus. I can only speak about how what I have walked through has deeply expanded my capacity to believe God. I stumbled, but God didn’t leave me. I fell on my face many times, and with each fall His hand was extended to me. He never let me stay where I was.

We often feel like God is no longer speaking to us or we can’t hear His voice anymore, but I interpret silence differently now. God is always speaking to us in different ways. It’s just that we’re locked into one frequency. His Word can communicate to us in whispers of comfort and in shouts of instruction. God speaks through pastors, poets, prophets, and the poor. He uses all of life to show His glory.

I was expecting God only to speak using my frequency, when He was always communicating in His own way. I even believe my dark moments were designed to tune my heart to a wider range of hearing God’s voice.

Excerpted with permission from I Am Restored: How I Lost My Religion but Found My Faith by Lecrae, copyright Lecrae Moore.

How have you experienced God’s redemptive story in the raw reality of your circumstances? In what ways can you tune your heart to the “wider range of hearing God’s voice?” We’d love to hear your thoughts in the comments! 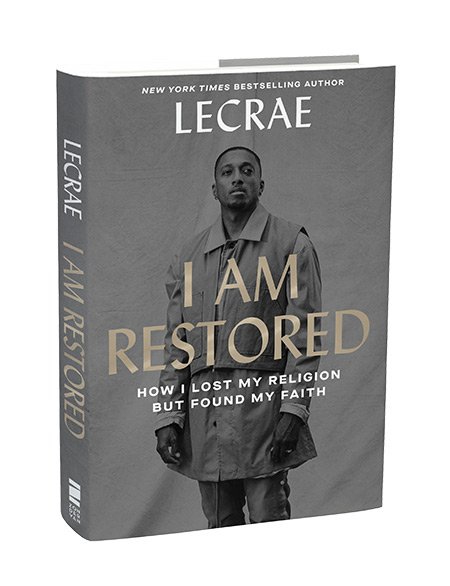 I am very proud of my brother for writing this book. I’ve always said you heal as you reveal, and this book expresses his experiences regarding his faith walk honestly, and in humility. If you want to understand how to transform your life experiences into a personal catalyst for your growth, look no further.
—Kirk Franklin

He poses the questions we’ve been too busy or too disinterested or too inarticulate to ask, and then he unearths perspective and insights we’ve been too myopic to clearly see. This book helps us. It has helped me. Write on, Lecrae. Your words are healing us.
—Priscilla Shirer, Bible teacher and New York Times bestselling author

It is a powerful, authentic story, not just of the trauma that invades our lives but of the strength and life that God gives us amid the chaos. His story is at times heartbreaking, but always filled with hope—and that is why it will resonate so strongly with anyone who reads it.
—Judah Smith, lead pastor of Churchome